6. Microsoft Partner Insights 2022 – People and the return to the office 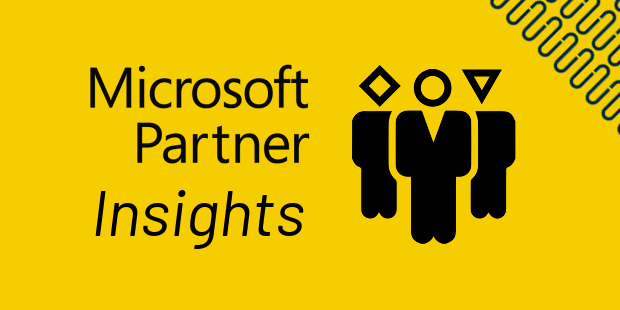 The office: To return or not return… that is the question!

Back to the office – Risky business?

But first, who makes up the workforce of the 50 companies we invited to take part?

In line with last year’s research , Microsoft Partners employing between 26-50 people were the most represented in this year, accounting for 36% of respondents, followed by 28% of the group who have a headcount of up to 25 employees. The largest companies in the survey with over 100 staff only accounted for only 6%. 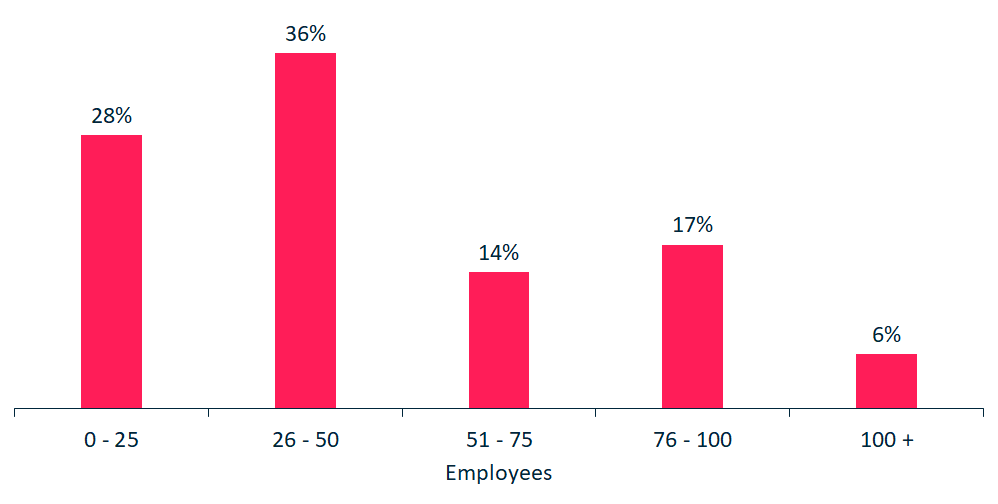 When looking at the average headcount split by department, there was once again little change from last years group. The biggest departments were ‘annuity service delivery’ with 30% (down from 35% last year) and ‘project delivery/consultants’ who accounted for 28% on average (26% in 2021). This reflects the fact that a large proportion of the participating businesses were Managed Service Providers (MSP) or System Integrators (SI)/Professional Services Consultancies.

When re-categorising these results based on the total company headcount buckets it was interesting to see how the different sized businesses weight their functions.

Sales, administration and project delivery departments were roughly in line with each other regardless of company size. There was a tilt towards a higher weighting in annuity service delivery teams for the larger organisations, with firms of 50+ employees allocating between 33-35% of their workforce here, this compares to just 21-22% for Microsoft Partner with less than 50 employees.

It was expected that ‘board & management’ would account for a higher percentage of the workforce on average in the smaller participating companies versus the larger organisations.

The office: To return or not return… that is the question!

The pandemic forced a shift in working patterns that, for many Microsoft Partners and their employees, has continued long after government restrictions and guidelines ended. We were interested to hear the thoughts of the CEOs on how their businesses had handled the return to the office. Where possible, we have included direct quotes taken from a series of 1-to-1 interviews with the senior leaders at some of the UK’s most successful Microsoft Partners.

Due to the Government lockdown, the number of people working from home rose dramatically during at the start of the pandemic, from 5.7% of workers in January 2020 to 43.1% in April 2020 (WISERD Homeworking report Aug-2020 ).However it’s the homeworking statistics and policies as we emerge from the other side of the pandemic that are really interesting as we consider whether office work will ever return to the way it was. Should you adopt a fully remote, hybrid working or fully back to the office approach? This was the question on everybody’s mind.

Is fully remote the future?

Within our cohort there was a wide mix of responses when we discussed this topic in detail. A small percentage of the group either already had no physical office space or had fully adopted remote working practices prior to the pandemic. So for them it was almost ‘business as usual’.

However this number has shifted significantly since then. For workers earning £40,000 or more for example, 42% said they expect to work mainly from home going forward “with an additional 23% working exclusively from home” (FT/ONS).

Many employers are letting employees choose

Where we started to see a consensus amongst the Microsoft Partners we interviewed was around giving employees significant flexibility. Within this group some CEOs interviewed were happy to let employees decide where they would like to work:

Others on the other hand had either rolled out an official hybrid working policy and mandated some level of attendance in the office, or were at the very least encouraging people to come in at some point during the week.

The Office for National Statistics (ONS) reported that 85% of workers currently homeworking wanted to adopt a hybrid working pattern going forward. Several of the leaders we spoke to were keen to have people back in the office at least in part to enable face-to-face time between team members, to maintain office culture and to build rapport between colleagues.

In fact maintaining a great company culture was an area that many were focused on.

While part of the formula for creating the right culture in a business today involves more flexibility for employees, for employers it’s important to ensure that the increased homeworking flexibility does not lead to increased isolation of team members and reduced employee engagement.

Innovation stagnation. Are you running out of ideas?

One CEO highlighted the loss of innovation due to remote working as the catalyst for encouraging staff back to the office.

“It’s been a very, very tough thing for us. We are really missing the innovation side of things. Being in the office is a great way to inspire and have the conversations you can’t do as effectively remotely.”

Many companies fear that they will lose their competitive edge due to increased remote working leading to less collaboration and innovation, however some research has shown (The Oxford Handbook of Group Creativity and Innovation 2019) that the larger the in-person group, the fewer new ideas each person has.

However the opposite happens for remote/virtual brainstorming, with more new ideas being produced the more people there are, leading to greater levels of innovation. This is partly attributed to the “balancing the preferences of introverts and extroverts, optimists and pessimists, lower-status and higher-status members.”

Productivity – Are you getting the most from your people?

Just as innovation a focus for some, for others it was productivity.

The jury is still out on whether homeworking increases productivity or not. There is plenty of research to show that is it is beneficial due to the reduced amount of time employees spend commuting, a higher employee retention rate, plus other drivers such fewer interruptions and more focused work time.

However many experts and industry leaders, including Microsoft, have also been keen to point out that productivity can suffer due to the lack of collaboration, communication and mentorship.

A 2 year study by global authority on workplace culture, Great Place to Work summarised the link between productivity and remote working succinctly:

“Productivity of both in-person and remote work are influenced by the same key factors: leadership and healthy, supportive company culture. Workplaces that are strong in both can have high employee productivity no matter where their desks may be.”

The impact of hybrid and remote working on employee wellbeing has rightly been at the centre of many homeworking discussion since the start of the pandemic. And while remote working has definitely benefited many employees, others are now working more hours, spending more time in low-quality meetings, more time juggling home and work life requirements, and ultimately more stress. It was clear during our interviews that this was a big concern for several of the Microsoft Partners.

And they were right to be concerned, a March 2021 study by the Journal of Occupational Environmental Medicine found that 66% of respondents reported new physical health symptoms since beginning to work from home, 75% reported new mental health issues, mainly depression and anxiety.

Back to the office – Risky business?

It was interesting to see a number of Partners who had reverted to being either fully back in the office or close to it.

The challenge for Microsoft Partners pushing for a complete return to the office is in retaining and attracting staff. There is now fierce competition in the recruitment market place and many tech companies are willing to offer fully or partially remote working roles.

With increased flexibility becoming the new ‘normal’, can businesses afford to break from the ranks and revert to pre-pandemic working practices? Harvard Business Review for example found that “40% of U.S. employees would start looking for another job or quit immediately if ordered to return to the office full time.”

For most business owners the discussion around remote, hybrid, or office based working has to be considered against the backdrop of commercial property costs and sparsely used office space. Can you justify having the cost of having an office if it’s only going to be 50% full?

Many had take the decision some time ago to either downsize or get rid of the office all together and the numbers just didn’t make sense.

Some of the CEO’s in the group had opted to reassess how they use the office and adjust the set-up accordingly.

Some of the world’s leading tech companies, such as Amazon, Google, Microsoft and Facebook, have been refitting their offices with more and more amenities such as additional collaborative working spaces, peloton studios, and music and games rooms in an effort to attract people back to the office.

For some of the other Microsoft Partner leaders in the group the answer lay in co-working or flexible work spaces/offices such as We Work or Bizspace.

The rise in the number of global co-working spaces has been phenomenal in recent years. According to MIT Sloan Management Review there were only 106 worldwide in 2008, where this number exploded to approximately 19,000 in 2018. A while the industry took a huge hit during the pandemic, analysts predict co-working spaces will become even more important and popular in future.

To mandate a return to the office leadership teams need to be clear on why they want employees to return. The are many ‘why’ areas to consider such as:

Without clarifying the ‘why’ it is very difficult to think about the next stage and ‘how’ do you do that.

This is the sixth chapter of our 10 part blog series, Microsoft Partners Insights.

Chapter 2 - Financial review for insights into the Financial information of the UK's top SME Microsoft Partners,